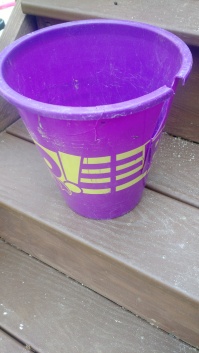 I’m working on some research on how trauma effects children. It is easy to get caught up in the “big” traumas. Abuse, neglect, separation from family. In our adult eyes those are the ones that matter, while things like a new sibling, moving to a new house or using the potty barely rate.

And it is true, we have a much better understanding of how brains develop and the long term impact that trauma can have on little minds. So, on a scale of “things that can have long negative consequences” something like moving or saying goodbye to diapers is on the low end.

However, it is important to remember that children don’t see trauma the same way that adults do. They have a different view, one that is much more personal and centered around themselves and they have less experience to compare it to. Things that we would brush off can be devastating to them. It isn’t our job to tell them to “get over it” but instead to give them the tools to cope.

Real life example, the purple bucket. It had been in our sand toys for a year or so. Finally, the plastic brittle, it cracked in many places. I tossed it in the recycling bin without a second thought.

When my 6 year old saw it, he melted down. He cried, he grabbed it out of the bin and wouldn’t let it go. He assured me it was one of his favorite things, that it was still good and that we could find something to do with it. No explanations on my part or reminders of the other buckets we have made a difference.

I don’t know what it was, but something about seeing that bucket in the recycling bin triggered anxiety and worry in him. Reasoning did nothing, if I had told him to “get over it” that would have done less then nothing. It may have seemed out of the blue and silly to me, but it was very very real to him.