In my definition, a “teachable moments” are the unexpected lessons that come up in the day that you have to grab at…even if the don’t ‘t fit the curriculum.  These lessons can be the strongest and are often more about people then facts. Most of my teachable moments have been the ones that I see and then guide the kids to, but not yesterday.

I was approached by a Fairfax Library to create a program around Eric Carle’s book “The Artist Who Painted a Blue Horse.”  Like most of Carle’s books the illustrations are vibrant and the text approachable.  But, the story behind WHY he wrote it was harder to navigate.  As he says on his website

“My new book, The Artist Who Painted a Blue Horse, is an homage to the Expressionist painter Franz Marc. In WW11 Germany, my high school teacher Herr Krauss introduced me to abstract and Expressionist art during a time when works such as these had been banned. The so-called “degenerate art,” paintings of modern and expressionistic art my teacher showed me were unlike anything I had been exposed to before. And really this experience changed my life, though I didn’t know it at the time.”

So my main task was helping 6-12 year olds understand Expressionist art and oppression in WWII…no problem.  Although I explained to them the history of the book we spent most of our time focusing on whether there was such a thing as “right” art and “wrong” art.  What we landed on was the idea that if someone told you art was “wrong” what they probably really meant is that it was different then how they would do it. 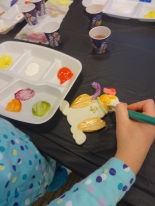 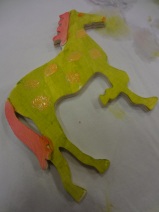 For the last activity I turned them loose with tempera paints and wooden animal cutouts and they could paint them however they wanted.  For 30minutes the room was nearly silent as they mixed colors and carefully painted.  As they finished they were given a choice to go back and play with the playdough we’d used at the beginning, or paint on the tablecloths. (Hey, it was a last minute inspiration to help fill time!)

As I circulated around I noticed one 6th grade boy who was concentrating so hard on the paint he was brushing onto the tablecloth. I asked him to tell me about what he was painting, although he hadn’t spoken a word to me at all during our group time earlier.  Now, however, the words started pouring out as he told me all about his art class and the study they had done on Keith Haring.  He told me about how Haring got his start, the style and meaning of his work and even the definition of “tessellation,” which he demonstrated for me in paint.  As he talked he slowly filled the table with his interpretation of a Haring piece.

I will admit, I had never heard Keith Haring’s name, but you can bet that as soon as I was home I was looking him up and immersing myself in images of his work.  The story that the boy had told me was so complete that the official website could only fill me in on Haring’s personal life. As I read I was wishing I knew who his teacher was so I could tell them what an impact they had clearly made on their student.

There were a lot of wonderful moments in that program, but the teachable moment was definitely one that I was given. It reinforced my belief  that age appropriate does not mean talking down to kids and reminded me of how alive kid’s minds are and what capacity they have for learning and absorbing even very difficult material. 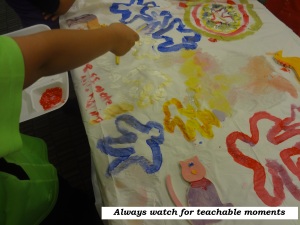