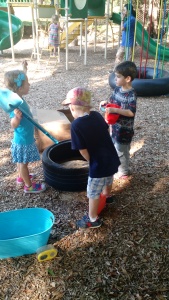 Last week I reflected on “rule breaking” in early childhood. To prove I’m not all talk I wanted to share this story…

“Keep the sand in the sandbox!” An adult voice called out. It was the rule, it had been the rule. Another teacher walked up to the director “Do we have to?” she asked “Can’t we let them take the sand out of the sandbox?” The director thought for a moment, thinking through our budget and if we could refill the sandbox earlier then intended and any other negative consequences. “Sure” she said “I don’t see why not.”

So, we stopped saying no, and started watching what happened. In teams of three or four the kids worked to fill up a huge plastic jar. When it was full it took two of them to lug it around the playground. The wrestled it up the climber and dropped bits through the holes, watching it sift to the ground. They watched handfuls cascade down the slide and compared it to how mulch slid.

Another group arranged a tire near the sandbox and transported sand to it any way they could. Shovels, buckets, dump trucks. They worked efficiently giving suggestions and directions to each other on how to get it there faster.

Eventually, the kids moved on to other projects and left the sand where it was. New groups of kids came up and started using it for their projects. Creating a construction site, adding it to the mountain they were building in the sandbox. In the end, a lot of it ended up making its way back to where it “belonged” in the first place.

We shared this story with another early childhood educator “You are sandbox heretics!” she laughed “I love it!” It’s a title I’ll wear proudly. Something to remind myself that just because something is the common belief, doesn’t make it right.