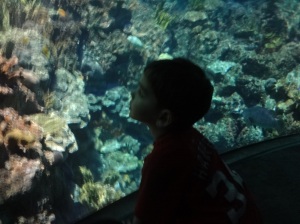 The last time we visited the National Aquarium, my son (3yrs old) treated it like a race he had to complete. I don’t know if it was the fact there was a “path” to follow, the crowds or what but I couldn’t convince him to slow down and look in the tanks. He just bee-lined straight from the “beginning” to the “end” as quickly as he could. I never consider a museum visit a waste…but I will say we didn’t get QUITE as much out of this one as we could have.

When a fascination with the show “Octanauts” led to him reading any ocean animal books he could get his hands on and asking for more and more facts about undersea creatures, it seemed right to try the Aquarium again. This time, I decided to experiment with ways to help us slow down and look.

Going in we had two big points in our favor

The night before I went on the Aquarium website and picked a handful of animals that were on display. I copied and pasted their pictures into a Word document (super high tech I know) and created a make-shift “Bingo” sheet.

In the car on the way there I gave him the sheet to look at and told him we were going to try to find all the animals and when he found one he could put a sticker on the picture. (The stickers stayed safely in my bag until he needed one to put on…I didn’t want any straying and ending up on museum walls!)

I could tell he was excited, he had that competitive gleam in his eyes and was rattling off everything he knew about the animals I’d listed. When we got there, I steered us away from the main path through the Aquarium and to the special exhibit on jellyfish. He had a special fascination with “jellies”so I knew he’d like, and I also hoped it would give us good practice looking before we got on the main path.

One other important piece of prep work I’d done was giving myself a stern talking to. It didn’t matter if the bingo sheet worked, if we were only there for 30min and if he only looked at one thing. We were just here to enjoy it at his pace and that was THAT.

Well…it worked. It worked so well even I was caught off guard. At first he was laser focused on finding the animals on his sheet, but that meant he had to look in each tank. Doing that meant he found other animals he knew from the show or his books or just things that looked cool.

I also let him wield the camera and snap pictures of whatever interested him, which made him pause and look just a little longer. When he couldn’t find the last animal on his sheet he asked museum volunteers for help and learned new facts in the process.

I let him take the lead, the only time I stepped in was when he was drawn in by the computer touch screens. I let him look for a while but then I moved us along. He would have stayed all day punching through different animal facts…which is great but also an experience I can give him outside the Aquarium walls.

After 2 hours I finally had to call a halt. Baby sister started to lose it and the rest of us were getting hungry. He would have stayed longer, but I also think that he would have gotten hungry and tired and things would have fallen apart quickly. Instead, we left on a high note with him practically skipping out holding his completed sheet.

So, what worked this time?

It isn’t a fail proof method, but it gives me a hazy outline to use for future museum visits. Hopefully one you can adapt for yourself!