A Lesson on Simple Machines…Simply Worked! 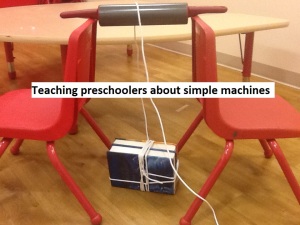 I’m teaching a workshop series on the “science of superheroes” and this week we were digging into the “gadgets.” The kids were buzzing with all the gadgets used by their favorite superheroes and shared how Wonder Woman had the invisible jet and Batman “had the really bright light and he shined it, like this, and the bad guy went AHHHHHHHHHHHHH and covered his eyes!” (Just go with it….)

But, we weren’t building a ray gun or a Batmobile or even a super-computer concealed in a wristwatch. Instead, we dove into the world of simple machines. Over the course of the hour we learned about three of the classic simple machines: a pulley, a lever and an inclined plane. I kept things very simple, introducing the concept, showing them the example I had brought and then letting them play with it.

Here is what we did!

Lever: A classic spoon “catapult” using 9 Popsicle sticks, 5 rubber bands and 1 plastic spoon. Directions can be found here. I found it useful to show them a more basic lever first using a triangle and rectangle block (recreating a classic teeter-totter…sorry, I forgot to take a picture!)

Pulley: I roped together two heavy books using clothesline from the drugstore. First, I had them try lifting the books just with the string. Then, I ran the line over a rolling pin. One scientist held the rolling pin while the other pulled the rope. The only thing you have to watch out for is the books crashing down on someone’s toes! 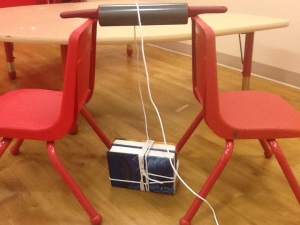 Inclined Plane: This was the brilliant idea of Peggy Ashbrook! I bought a length of Cove Molding from my local hardware store and had them cut it into 1ft lengths. Marbles are the perfect fit to run long the grooved track. Using blocks, the scientists could construct elaborate ramps to run the marbles down. All on their own they came up with new tests, like what would happen if they used a steeper angle!

As you can see, all three simple machines are built with things you find around the house or at your local home-improvement store. A great book to bring it all together with is “Rosie Revere Engineer,”I just discovered it and think its amazing.

Thanks to Pinterest, and Peggy Ashbrook (my co-teacher from TSA Summer Camp) for the inspiration!

8 Responses to A Lesson on Simple Machines…Simply Worked!